Blog Tour | Empress of All Seasons – Emiko Jean: Where I encourage you all to buy it for you and your friends!

Welcome to my Empress of All Seasons Stop! I had been really fortunate to be part of the tour and for that, I want to thank our Tour Organizers, Caramel of Bookablereads & Rafael of The Royal Polar Bear Reads.

Title: Empress of All Seasons

In a palace of illusions, nothing is what it seems.

Each generation, a competition is held to find the next empress of Honoku. The rules are simple. Survive the palace’s enchanted seasonal rooms. Conquer Winter, Spring, Summer, and Fall. Marry the prince. All are eligible to compete—all except yōkai, supernatural monsters and spirits whom the human emperor is determined to enslave and destroy.

Mari has spent a lifetime training to become empress. Winning should be easy. And it would be, if she weren’t hiding a dangerous secret. Mari is a yōkai with the ability to transform into a terrifying monster. If discovered, her life will be forfeit. As she struggles to keep her true identity hidden, Mari’s fate collides with that of Taro, the prince who has no desire to inherit the imperial throne, and Akira, a half-human, half-yōkai outcast.

Torn between duty and love, loyalty and betrayal, vengeance and forgiveness, the choices of Mari, Taro, and Akira will decide the fate of Honoku in this beautifully written, edge-of-your-seat YA fantasy

Since I heard of this book, I scouted for an advance copy, here and there the struggles of an international reader. I really wanted to read it that bad. And I am very thankful for being included in the tour, among fellow lovely bloggers. And generous organizers.

Empress of All Seasons is an #OwnVoices Japanese fantasy novel, written by Emiko Jean. It has amazed me in many ways from the premise to the last bit of the ending, especially that ending. (SHOUTOUT to my girl, Mari.) It is a story that tackles love, friends and family, honor, duty, and morals.

“The rules were simple: Survive the Rooms. Conquer the Seasons. Win the prince.”

A book that had blown me away, right off the bat. The premise alone, who doesn’t want to know those enchanted seasonal rooms? and yōkai, supernatural being that has to be enslaved by the emperor, then thrown a bit of the town between duty love, loyalty, and betrayal, vengeance, and forgiveness. I sense enemies to lovers trope, and gods and goddesses I am nothing but a drooling patsy when it comes to my favorite kind of trope. And It did not disappoint me.

“Funny how love can drive you to hate.”

That was just the premise. Let’s talk about how wonderful the prologue is, it is ensnaring, words flow eloquently, the story itself reveals of what had happened then, it builds up as the novel begins, done in such anticipating capacity, my words won’t do any justice over it. It’s ineffable. You’d just have a hard time trying to put it down.

A rich and very atmospheric book, from the senses that we see and feel. It has described the setting really well, from Mari’s hometown and the City, the travel farther. Filled with mythology and cultures, growing wild with the new ones you meet too, cursed below creatures up to the mightiest gods and goddesses that casts upon curses, are mesmerizing to read. I am magnetized by it all.

It has a reminiscent of The Hunger Games, but Empress of All Seasons surely brought something unique of a perspective in. It is enticing to read the how of these Seasons are and for the competitors, not to mention the traditionally rich and vibrant setting, thrown in there definitely something to watch out for. Possibly clutch your heart with then.

“You must take this leap. The jump always makes the fall worth it.”

I am not overselling things, there are some weak centers in the characters shift, I don’t really mind. I enjoyed the “how” the love growing amongst characters to be something natural especially in the depth of again family, duty, honor, and morals. And as it is set in an era of then filled with rich cultures and influences. It was complicated yet not truly. I adore these characters altogether, they make a pretty great team and opponents I suppose hehe.

And lastly ending was something I really love! It hits me well and struck me as empowering too. I’ll leave it to that. And if you’re really curious it is something for you to find out. It’s worth the time, money, effort, and reading! Totally recommend it for everyone!

Of course, given with the precaution of these; Trigger Warnings: systematic oppression; slavery, forced adoption, childhood abandonment.

Disclosure: Copy provided by HMH through NetGalley and Caramel & Rafael in exchange for a place on a promotional blog tour. All views and opinions are my own and don’t necessarily reflect the author, the author’s work, the publisher, nor any other group of people, nor receive any monetary compensation for doing this review. Booklinks contain affiliate links in which the blogger receives a tiny commission on all successful purchases.

Quotes taken from the book are subject to change for finalization as this is a review of an advanced reading copy. 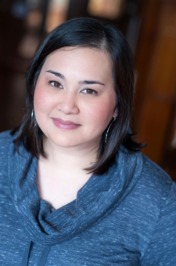 When Emiko is not writing, she is reading. Most of her friends are imaginary. Before she became a writer she was an entomologist (fancy name for bug catcher), a candle maker, a florist, and most recently a teacher. She lives in Washington with her husband and children (unruly twins). She loves the rain.

Name: Emiko, Emi, Emmers Bemmers Boo Boo (only my mother calls me this)

Occupation: Writer and reader, most days reader before writer

Previous Occupations: Bug tamer, teacher, florist, candlestick maker and vagabond. My friends and I once (poorly) fixed up an old van. We drove it across the country. The bumper fell off and we lost the brakes in the Redwoods.

Qualifications: None. But I strongly believe in “fake it till you make it” and asking for forgiveness rather than permission.

Favorite foods: ALL OF THEM. Though I do have a special place in my heart for girl scout cookies, frosted animal cookies and anything with pasta.

Favorite time of year: Fall. I also love Christmastime (even though I’m Jewish).

Favorite authors: Too many to count.

Least favorite things: The word “moist” – I dare you to find it in one of my novels.

Unusual talents/facts: I am fantastic at finding four leaf clovers. I can also make three loops with my tongue. I’ve also won my fair share of Texas Hold’em tournaments. (emikojean.com)

More Empress of All Seasons? Visit these awesome blogs!

Have you read Empress of All Seasons? Know any similar book? Leave me a recommendation.

10 thoughts on “Blog Tour | Empress of All Seasons – Emiko Jean: Where I encourage you all to buy it for you and your friends!”